Instructor will work with youth males to teach stepping and strolling techniques. Students will learn how to lead and inspire a collective purpose by working as a team to create a step with stomps, synchronization and dance movements. Students will also gain motivation by learning the choreography and being rewarded by Instructor when successful as a team. Students who embody leadership attributes and positive behavior will be rewarded by earning a lead role in the step routine. A large space for a group of students to move freely and make noise as necessary. 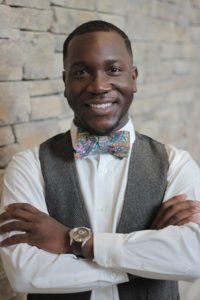 Originally from San Diego, California, Joseph Shepard relocated to Wichita Kansas in 2011 to pursue a degree in Criminal Justice from Wichita State University. During his undergraduate career at Wichita State, Joseph became highly involved on campus and worked diligently to create a college campus that supported everyone. During his undergraduate career, Joseph served as President of Alpha Phi Alpha Fraternity Incorporated, President of the Multicultural Greek Council, Facilitator for Men of Excellence and he served two terms as Student Body President. During his time as Student Body President, Joseph developed a passion for serving and meeting the needs of at-risk youth. He created “Wichita State Inspire” a program in collaboration with USD 259 to encourage them to attend college in the future. As a first-generation college student, Joseph believes that every child needs and deserves a champion to help them reach their goals. Upon graduating with his Bachelor’s degree from Wichita State University in May 2016, Joseph returned to Wichita State in August of 2017 to pursue his Master’s Degree in Public Administration. In May 2018, Joseph graduated with his Master’s Degree from Wichita State University and plans to make Wichita his permanent home. He aspires to get involved with local politics to create a stronger and more prosperous future for Kansas. He is the recent recipient of the Wichita Business Journal 40 under 40 Award and Sigma Gamma Rho Sororities Young Achiever Award. He is currently working at the Kansas Leadership Center.

This Organization received funding for general operational support from the City of Wichita The Kansas Creative Arts Industries Commission and the National Endowment for the Arts.